The 1994 - early 1999 model year 7.3L Power Stroke diesels (all "OBS" trucks and early Super Duty) utilize a two stage, camshaft driven mechanical fuel pump. A lobe on the camshaft operates a plunger protruding from the bottom of the fuel pump and through the engine valley. The 1st stage of the fuel pump is the vacuum side; it creates between 4 and 6 psi of negative pressure to draw fuel from the fuel tank and into the fuel water separator. The 2nd stage of the fuel pump is the pressure stage, where fuel is pressurized in the 40 to 70 psi range and delivered to each individual injector. 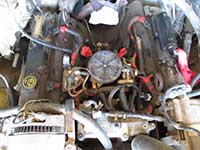 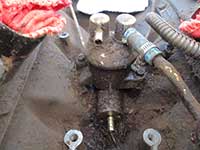 • Remove the blue fuel line from the vacuum side (towards driver) of the fuel pump. 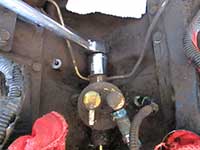 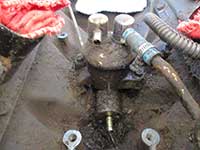 • Remove the two bolts securing the fuel pump to the engine block with a 10mm socket, alternating between the left and right bolts.

• Pull the fuel pump straight upwards (perpendicular to engine valley) to remove. This may require a fair amount of force. You may rotate the fuel pump slightly as you pull, but do not rock the assembly side-to-side; this may cause the plunger on the bottom of the fuel pump to break off flush with the engine valley.

• Lubricate the o-ring on the fuel pump plunger assembly with clean motor oil. 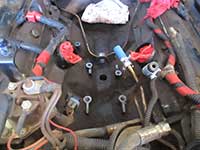 • When tightening down the fuel pump, alternative between the left and right bolts frequently. Torque fuel pump retaining bolts to 18 ft-lbs (24 N-m). 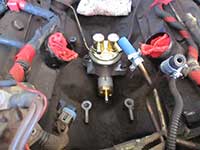 • Note that the engine will require a significant amount of cranking to bleed air from the fuel lines.

• Start the engine, check for leaks, and verify fuel pressure.