*Not all listed parts required to rebuild fuel filter housing; many parts are serviceable and can be cleaned/reinstalled. "REQ" = required, "OPT" = optional, "REC" = recommended 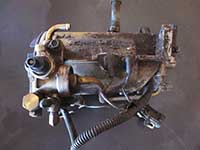 Note - the fuel heater electrical connector can be stubborn. You may need to gently prey side to side. A replacement harness is somewhat expensive, so do not get impatient and break it.

• Remove the wiring harness from the fuel filter assembly by maneuvering the connectors one-at-a-time through the opening at the bottom of the housing. This harness is to be cleaned and reused if it is not damaged.

• Remove the fuel filter stand pipe using a 7/8 inch crowfoot wrench and socket extension. Rotate it clockwise to loosen, it is left hand thread. A flare nut crowfoot wrench is preferred as it will eliminate the possibility of damaging the plastic hex nut molded into the base of the stand pipe. Remove by hand once it has been broken loose and be careful not to damage the fuel heater element.

• Carefully tilt the fuel heater and disconnect the terminal from the connector that passes through the body of the fuel filter housing using a pair of long needle-nose pliers. 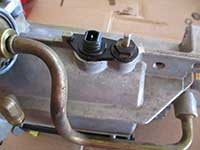 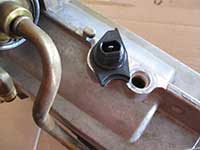 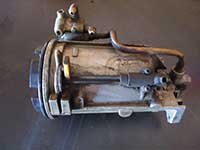 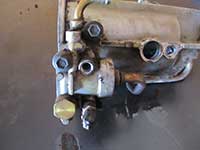 • There is a small screen located between the fuel filter housing and fuel regulator assembly. Refer to the image - this one is completely clogged. Behind the screen is the bleed orifice (white plastic component) followed by a small plastic check ball. Remove the screen, orifice, and check ball. 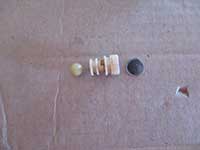 Note that the screen may or may not be attached to the bleed orifice, they tend to detach but can still be reused. Do not lose the check ball. 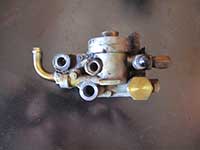 • Remove the fuel pressure relief valve using a 19 mm socket. Behind the brass nut is a spring and plunger; set them aside. 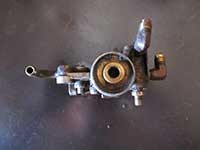 • Remove the snap ring from the fuel pressure regulator, then remove the brass cap. 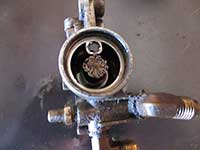 • Remove the plastic cap from the fuel restriction sensor port and set aside (see image for details). A small pick can be used to gently pry it upwards.

• Remove the metal filter screen from the fuel pressure regulator.

• Completely clean all metal interior and exterior components of the fuel filter housing and fuel pressure regulator assembly with a mild solvent or parts cleaner. Clean plastic components with a plastic safe electrical connector cleaner, not a harsh solvent. Ensure that every orifice is cleaned and debris free before reassembly. 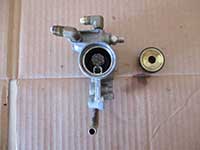 IN ALL REASSEMBLY STEPS, LIBERALLY COAT EACH O-RING IN CLEAN MOTOR OIL BEFORE PRIOR TO INSTALLATION. 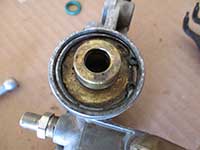 • Replace the small o-ring in the top of the fuel pressure regulator. A pick is necessary to install the new o-ring, but be carefully not to cut it. 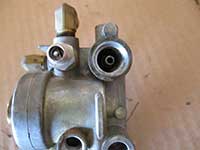 • Reinstall the fuel pressure relief valve with a new o-ring; do not overtighten. 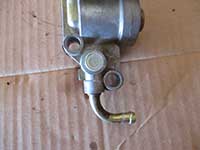 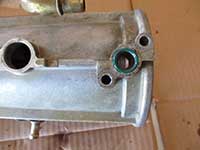 • Install a new o-ring in the opening between of the fuel filter housing where the bleed orifice/screen installs. 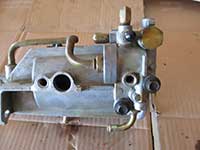 • Disassemble the fuel drain valve by first removing the two large o-rings that seal the valve to the fuel filter housing. Next, rotate the drain valve until the flat spot on the ball valves is visible through the two holes on the back of the valve. When these are lined up properly, the valve core can be removed from the drain valve body.

• At the top of the valve core is a white pin. To remove it, thread a small machine screw into the top and carefully extract. Beneath the pin is a check ball - do not loose it. 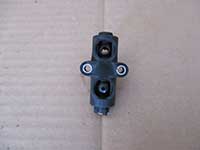 • Replace all o-rings, clean the drain valve components, and reassemble in reverse order. 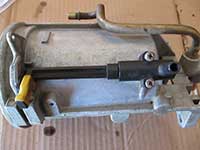 • Rotate the valve until the valve is in the open/drain position (you will see both holes in the ball valves from the back). Insert the drain valve lever so that it matches the open position on the fuel filter housing. Install the valve on the housing and tighten down the two Phillips headed bolts. Torque drain valve bolts to 20 - 25 in-lbs. 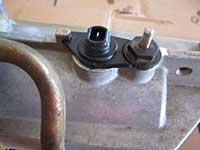 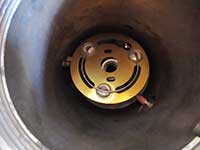 • Reinstall the fuel filter heater. Tilting it to one side allows access to the connector. The tab on the heater must rest against the corresponding tab cast into the fuel filter housing (see image) so that the heater assembly will not spin and become damaged when the stand pipe is installed.

• Reinstall the stand pipe by hand. Dip the threads in clean motor oil first. Recall that this is reverse (left-hand) thread. Snug it using a flare nut crows foot (as used in removal), but do not overtighten. 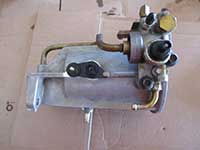 • Reinstall the wiring harness and plug in the fuel filter heater thermostat/connector and water-in-fuel sensor. Ensure that all electrical connectors/terminals have been cleaned.