Stuck or sticking VGT vanes will often, but not always sets a DTC (CEL) related to turbocharger performance (P132B, P2263 for example). The most common insight into possible stuck/sticking VGT vanes is excessive turbocharger lag, particularly during heavy off-idle acceleration or freeway merging. In such instances, the turbocharger will experience severe lag and fail to build boost at low engine speeds. The following series of tests can be used to narrow down the source of driveability concerns related to turbocharger performance. A diagnostic tool with enhanced PID reading capability and actuation features is necessary for certain test procedures.

Remove and inspect the condition of the EGR valve - a clogged EGR valve can affect VGT operation. If any EGR related DTCs are present, repair the EGR system prior to diagnosing turbocharger concerns.

Visually inspect the condition of all CAC/intercooler boots and replace worn, cracked, or otherwise damaged boots. Before diagnosing the VGT system, verify that the problem is not related to a boost leak on the compressor side of the turbocharger. CAC boots tend to degrade as a result of oil from the crankcase ventilation system settling in the boots.

A manifold gauge pressure (MGP) test is the most optimal method for testing VGT function, as it measures turbocharger boost pressure with respect to VGT vane position. Before performing the test, allow the vehicle to warm up for several minutes - results may be most accurate on an engine at operating temperature. With an enhanced diagnostic system, perform the following test procedures:

1) Set up the system to monitor exhaust back pressure (EBP) and manifold gauge pressure (MGP). 2003 and 2004 MY trucks that have had the 06E17 flash update use an inferred EBP value and therefore this PID is not available and can be ignored.

6) Compare the results with Ford spec:

Note - values may not be applicable to trucks with aftermarket intake and/or exhaust systems.

If EBP is not within spec, replace/clean the EBP sensor and repeat the test. Additionally, a minimum 22 psi MGP should be recorded at 3,300 rpm in 3rd gear under WOT (wide open throttle). If recorded values do not fall within spec, the VGT system is not functioning properly. Disassembly and cleaning of the VGT components is advised. 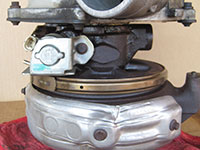 • Remove the VGT solenoid and turbine housing heat shield. Both require an 8 mm socket - the solenoid must be a 12 point socket. 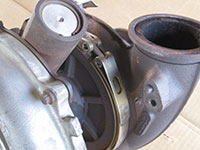 • Using a scribe or paint marker, draw a reference line across the turbine housing and one edge of the turbine V-band clamp. You will need to use this reference line to orient the clamp during re-installation so that it is positioned in the exact same location that it was removed. 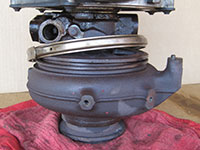 • Loosen and then remove the nut from the turbine housing to bearing housing flange V-band clamp (11 mm deep socket). Removing the bolt from the clamp entirely will make the clamp easier to manipulate in subsequent steps.

• Position the clamp off of the turbine housing and onto the bearing housing such that the flange/groove between the two sections is visible.

• Position the turbocharger on a workbench so that the turbine housing outlet (exit to downpipe) is face down on the work space and the compressor inlet is pointing upwards.

• Once the gap opens up wide enough that a pry bar or large flathead screwdriver can be inserted, carefully work around the housing until the two halves separate completely. Work the groove open evenly around the entire circumference in small increments so that the turbine housing does not contact the turbine wheel during disassembly. Separating this parts may require patience, as they tend to be extremely stubborn. Do not be afraid to reapply penetrating fluid and let the parts soak.

• When the housing eventually separates, ensure the turbine outlet is face down on the workbench so that the unison ring and VG vanes do not fall out of place.

• With the halves separated, you can test VG operation by rotating the unison ring. 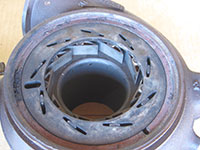 • Remove the unison ring followed by the individual VG vanes. Place the vanes in a container filled with penetrating lubricant and allow to soak for several minutes in order to loosen any heavy deposits. 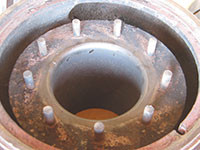 • Clean the turbine housing and unison ring. The preferred method is using 3M's Roloc (alternatively Scotch-Brite) surface conditioning discs attached to a pneumatic die grinder. These discs are 2" in diameter, so you will have to trim several discs down to 1" diameter in order to clean the surface around the VG vane pins.

• Clean the individual VG vanes by hand using a Scotch-Brite disc or equivalent means - do not use sandpaper, harsh abrasives, or power tools on the VG vanes. Clean deposits from pinholes with a copper/brass wire brush. 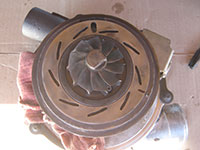 • Once all the surfaces have been cleaned, install the VG vanes and unison ring, then check for proper actuation and clearance. Verify that unison ring moves freely around the flange on the bearing housing below the turbine wheel (see image). If any interference or clearance issues are detected, continue cleaning.

• Disassemble the turbine housing and clean the housing, VG vanes, and unison ring with brake cleaner or an equivalent solvent, removing any debris that may have accumulated while cleaning.

• Clean the bearing housing side with compressed air - do NOT use a solvent. 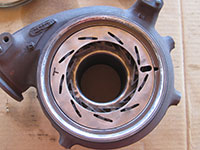 1) Install the VG vanes onto the pins in the turbine housing followed by the unison ring - you will have to continuously adjust the vanes until their control slide falls into the corresponding slot on the unison ring. Once you've installed the unison ring, mark the surface facing you with a "T"; for our purpose, we're calling this the top of the unison ring.

3) Move the unison ring so that the VG control arm is roughly centered (centered between the right and left positions). Mark the location of the protruding alignment pin on the bearing housing onto the unison ring (see image). 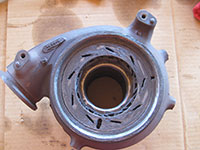 • Assembly the VG vanes and unison ring (unison ring must be installed in the correct position using your reference line). Cycle the vanes through the fully open and closed positions several times, then remove any excess anti-seize. 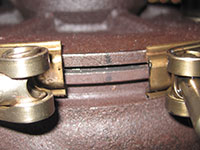 • Maneuver the turbocharger so that the groove between the bearing and turbine housings is roughly the same on all sides. Lightly tap around the entire circumference of the bearing housing with a dead blow hammer to begin to seat the housing. After a series of taps, verify that the turbine/compressor wheel spin freely; if the wheels are bound, the housing is contacting the turbine wheel and not seating straight. If this occurs, separate the housing and start over or attempt to even out the groove. The housing needs to be seated evenly such that the turbine wheel does not bind. It may take several attempts to seat the housing evenly.

• Increase the force of your blows as necessary to continue to seat the housing. Ultimately, you'll want to seat the housing until the groove is eliminated and the two sections are fully seated; do not neglect to check for binding of the turbine wheel during this process.

• Reinstall the VGT solenoid. Torque bracket retaining bolt to between 15 and 18 ft-lbs.