Removing the turbocharger will be slightly different for early 2003 model year pickups due to the oil supply line. Whereas the turbocharger oil supply line on late 2003 to 2007 trucks is held in place by a collar bolted to the fitting at the oil cooler (in the engine valley), the early 2003 model year trucks feature a quick connect type fitting that requires a special tool. To verify the type of feed line you have, follow the oil supply line from the top of the turbocharger down into the engine valley - if you see a bolt and collar securing the line, you do not need any special tools. If you see what appears to be a thick rubber grommet and no hardware securing the line, you have the quick connect fitting. The correct tool for this type of fitting is OTC 6594. The equivalent Ford part # is 303-755, however the tool that Ford distributes is not as readily available and will cost you 3 to 4 times that of the identical OTC product. Do not attempt to remove the quick connect fitting by any other means - this tool is used in various high pressure oil system lines, so add it to your toolbox. The oil supply line outlet at the top of the turbocharger will be a flanged connection regardless of model year.

2003 model year engines also have a slightly different turbocharger pedestal and turbo mounting bolts. For this model year, all three turbocharger-to-pedestal mounting bolts are horizontally mounted; a bolt to the left, right, and rear of the compressor housing. The bolts also have a spacer that is removed with the hardware. Later model years (2004 - 2007) feature two horizontally mounted turbocharger-to-pedestal bolts (to the left and right of the compressor housing), but the rear bolt is vertically mounted and much easier to access. These also have spacers built into the pedestal that are not removable.

You may also consider replacing the IPR valve while you have the turbocharger off and the ICP sensor if you have a 2003/early 2004 model year truck. On all 6.0L Power Strokes, the IPR valve is located in tight quarters behind the turbocharger and underneath the turbine inlet pipe. If cost effective and your IPR valve has some miles on it, this is a good time to replace it. On 2003 model year trucks, the ICP sensor is also located in this general area, just behind the IPR valve. Although the sensor can theoretically be replaced with the turbocharger installed, it is difficult to access and replacing it with the turbo removed will save you the frustration. The ICP sensor was moved to the passenger side valve cover just above the glow plug control module beginning the 2004 model year. 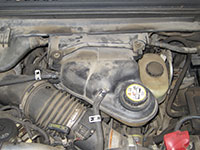 • Remove the intake tubing between the compressor housing and air filter, including the metal intake tubing bracket attached to the top of the FICM (10 mm socket for FICM studs). 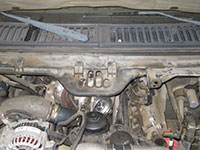 • Carefully remove the push-pins securing the harness running against the cowl from the passenger side to the driver side, then position the harness upwards and out of the way. 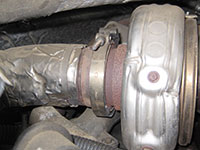 • Loosen and then remove the Marman clamp from the turbine outlet to the downpipe.

• It may be necessary to pry the Marman clamps at each of the (3) V-band sections in order to dislodge them from their corresponding flange - a flathead screwdriver typically works well. Both the downpipe and up-pipe Marman clamps require an 11 mm socket. 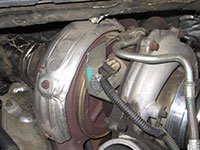 • Disconnect the VGT solenoid connector, then remove the solenoid harness clamp mounted to the compressor housing. Position the harness aside so that it does not get snagged while removing the turbo.

• Disconnect the oil supply line from the top of the turbocharger using a 10 mm socket.

• Disconnect the oil supply line from the oil cooler fitting (follow the line into the engine valley). For late 2003 and later model years, remove the collar hold down bolt and pull the tube upwards to remove. For early 2003 model year engines with the quick connect fitting, use the oil line removal tool (OTC 6594) by wedging the fork between the rubber connector and the flange, as seen pictured. This will release the line, then simply pull upwards to remove. When the fitting releases, you should not have to pull hard to remove it. 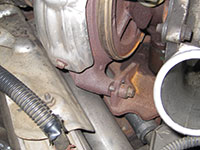 • Liberally spray penetrating lubricant/fluid on all three turbocharger mounting bolts. The left and right pedestal bolts are easy to see. However, you may need to feel for the rear bolt in order to find it, as it is behind the compressor housing between the downpipe and up-pipe. 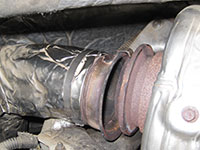 • The downpipe features a small hook that loops over the turbine outlet flange. Position the downpipe so that this hook is no longer secured to the downpipe flange.

• Lift the turbocharger upwards and use a side-to-side rocking motion to release the oil drain tube from the bottom of the turbocharger. Once the drain tube releases, maneuver the turbocharger out of the engine bay. There is limited space, but have patience and it will come. Avoid snagging coolant and/or parts of the wiring harness. 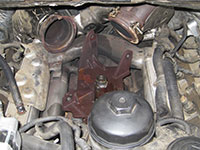 • Once the turbocharger is out of the vehicle, remove the oil drain tube by pulling it out towards the radiator while rocking side-to-side. 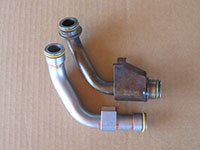 • The 2003 - 2006 MY drain tube's only advantage is that it features a flange that restricts the tube from being over-inserted into the HPOP (high pressure oil pump) cover. For the 2007 MY drain tube, we'll need to measure the correct insertion depth.

• The preferred 2007 MY drain tube is mandrel bent and is thought to better prevent turbocharger failures from lubrication related issues. 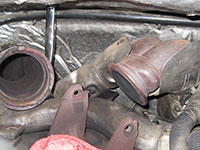 • If you're removing the turbocharger on a 2003 or early 2004 MY engine, you may want to replace the ICP sensor in order to save future frustrations. The IPR valve is also hidden behind the rear intake runner on all model years. For the ICP sensor, you can reach it using a 1-1/16th inch, 12 point flare crows foot with a 6" extension after removing the electrical connector. Don't expect to see it, you'll have to work by touch. 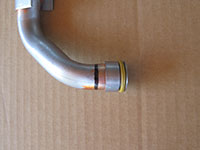 • Re-installation of the turbocharger is more tedious than removing it - work slowly and do not attempt to force the turbo into place.

• For 2003 - 2006 model year oil drain tubes: Coat the o-rings with clean 15W-40 motor oil, then insert the tube into the HPOP cover until the flange contacts the housing and tube cannot be inserted any farther. 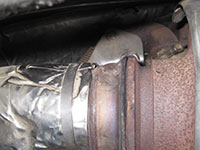 • For 2007 MY drain tubes, push the drain tube into the HPOP housing to your reference line; do no not over-insert the tube and do not pull the tube out once it has been inserted, as the o-ring may be damaged. 0.9" is International's spec, but there is obviously a bit of leeway here.

• Begin installing the turbocharger-to-pedestal bolts, but do not tighten. Anti-seize lubricant will help them thread easier and protect against corrosion in the future.

• Install the downpipe and up-pipe Marman clamps, then snug down. Mind the orientation of the clamps, you want them to be accessible after complete reassembly. Torque both Marman clamps to 89 in-lbs (INCH pounds). Re-torque these clamps after several drive cycles. Verify that the flanges and not misaligned.

• Tighten the turbocharger-to-pedestal mounting bolts and torque to 28 lb-ft. 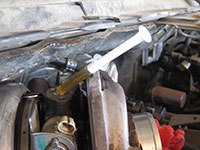 • Reinstall the hot side CAC tube. Torque intercooler boots to 70 in-lbs after cleaning any oil residue from the tube and interior of the boot.

• Re-clip the wiring harness to the cowl, then reinstall all intake plumbing. Do not forget to insert the crankcase vent tube into the valve cover on the driver side.

• Start the engine; check for leaks and re-torque intercooler boots and Marman clamps (downpipe and up-pipe) after several drive cycles.