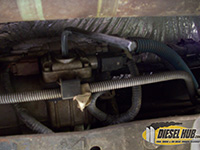 • Locate the HFCM on the driver side frame rail between the engine and fuel tank.

• Once the HFCM has been drained completely remove the primary fuel filter cap with a 36 mm socket. Accessing the filter cap is more difficult on four wheel drive trucks; a breaker bar or box end wrench is slim enough the move into position. A standard ratchet tends to be too large.

• The fuel filter generally comes out with the cap; if it does not, remove it manually. You may need to separate the fuel filter from the cap in order to maneuver them both out of the frame rail. 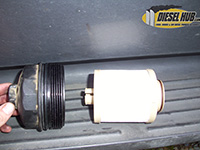 • Remove and replace the o-ring from the fuel filter cap.

• If you have a four wheel drive vehicle, you may need to assembly the fuel filter into the cap once both have been positioned back into the frame rail - you likely noticed that it is a tight squeeze between the cross member and drive shaft when the two parts are assembled.

Lightly coat both o-rings (cap and bottom of filter) of the new fuel filter with clean motor oil before installing into the HFCM. Torque cap to 19 lb-ft (25 N-m). 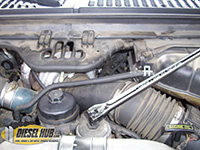 • The secondary fuel filter is located next to the engine oil filter on top of the engine. Remove the cap with either a 24 mm socket or 1/2 inch square drive. Using a square drive to loosen the cap has a tendency to strip/damage the plastic hex head overtime and using the appropriate socket is therefore advised (a 15/16" socket also fits rather well).

• Drain the fuel filter housing of any fuel. An oral syringe or turkey baster work well.

• Remove and replace the o-ring on the fuel filter cap. Lightly coat the o-ring with clean motor oil, then reinstall the cap. Torque to 10 lb-ft (14 N-m); do not overtighten the cap.

• Turn the key into the "run" position (as you would to initiate the glow plug sequence) for 30 seconds, then back to the "off" position. Repeat this procedure a minimum of 3 times in order to prime the fuel system before starting.