We recommend 6.0L Power Stroke owners service their EGR valve every other oil change or once per year - this is typically routine enough to avoid complications, although some engines suffer from more persistent problems. Modified engines be more susceptible to EGR valve clogging concerns due to a greater production of exhaust soot. Consider this - what comes out of your tailpipe must also pass through the EGR valve. If performance tunes or other injection modifications give your truck a tendency to produce more smoke, the same soot is passing through your EGR system.

P0404 - Exhaust gas recirculation circuit range/performance (many possibilities, one of which is the valve position is not matching that commanded by the PCM)

As long as the valve is mechanically stuck/sticking, i.e. there are no electronic issues with the solenoid, cleaning the EGR valve is an affordable repair method with a high rate of success. At time of publishing, a Ford branded remanufactured EGR valve cost $145 USD, whereas a new o-ring and gasket set could be purchased for just over $10 USD. 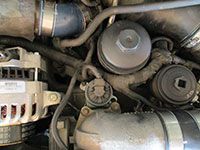 • The EGR valve is located behind the air intake elbow, to the left and below of the oil filter housing.

• Remove the electrical connector from the EGR valve. There is a retaining clip on the rear of the EGR valve connector that must be released, then the connector can be pulled straight upwards. 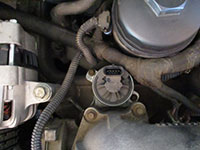 • Remove the (2) EGR valve retaining bolts at the base of the valve where it seats to the intake manifold using a 5/16" socket and an extension. Be careful not to lose the bolts in the engine valley. We advise loosening the bolts, then finishing to remove them with a pair of needle nose pliers. The bolt to the right is particularly difficult to reach by hand. 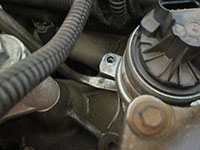 • The EGR valve needs to be lifted straight upwards to remove. We use a large screwdriver with the tip bent at a 90° angle. By tilting the valve slightly to one side, this tool can be used to pry the body of the valve upwards. Once the o-rings have been unseated, it should come out with ease. 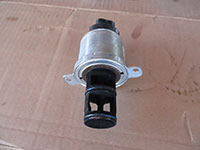 • This valve isn't particularly dirty as it's being cleaned as a preventative measure - it's common for the EGR valve to be packed with soot such that the valve stem is not visible.

Note - it is completely normal for the valve to be absolutely packed with soot. However, the presence of a white, powdery or crystalline residue is a sign of an EGR cooler leak/failure; the white deposits are residue from engine coolant leaking into the exhaust stream through the EGR cooler. Catching such leaks early on is an advantage of periodic EGR valve service. 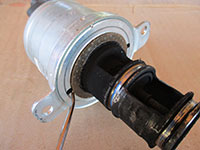 • Remove the pair of o-rings from the EGR valve. They may be brittle and simply break off.

• Remove the gasket from the EGR valve using a pick or small screwdriver - there is a slot on either side of the gasket that helps unseat it. 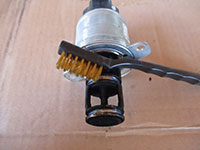 • Thoroughly clean the EGR valve. There are many methods for cleaning, but we choose to use a brass wire brush and CRC electrical connector cleaner. Electrical connector cleaner is not nearly as harsh of a solvent as brake/carb and choke cleaner, but is plenty strong enough to get the job done. If it should enter the solenoid itself, it is electronic and plastic safe. Steel wire brushes are not advised, as they may scratch or mar the valve seats. 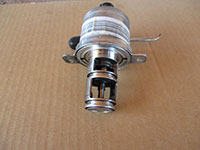 • Remove any heavy deposits with a pick or small screwdriver, then spray and brush affected areas of the valve until it is clean. Pay special attention to the valve seats and stem. You may also dip the tip of the valve into a container filled with solvent, brush throughly, and repeat. As previously stated, there are many correct methods for cleaning the EGR valve. 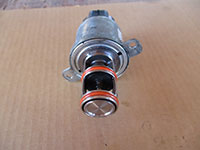 • Once the valve is clean, install the new gasket.

• Lightly coat the new o-rings with clean motor oil and install them on the valve. You'll want to install the top o-ring first, followed by the bottom o-ring. Oil helps maneuver the o-rings with damaging them and seat the o-rings during reinstallation. 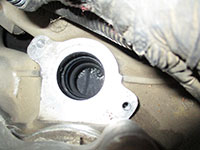 • Clean the EGR passage in the intake manifold with a clean rag soaked in a solvent. Remove any large deposits and residue to ensure the o-rings seat properly.

• Use a shop vacuum to remove all deposits, dust, and debris now at the bottom of the EGR passage - this step is critical. 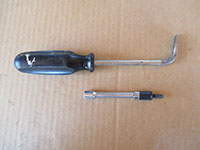 • Reinstall the EGR valve, lightly coating the retaining bolts with anti-seize. Start the bolts by hand and alternate from the left to the right side frequently while snugging the bolts down. Once the EGR valve is fully seated, torque to 120 in-lbs (10 ft-lbs).

• A convenient way to reinstall the retaining bolts is to lightly tape them to the tip of the socket (see image). Once the bolt has been started, you can release the socket and fish it out with needle nose pliers.

• Also pictured is the simple screwdriver modified to quickly and easily remove an EGR valve. It has a variety of additional uses, and every toolbox should have one.